What on Earth is Photon Disinfection?

Photon Disinfection is an effective means to destroy bacteria and fungi automatically. When utilized with a photocatalytic coating, (Ti02) it also destroys viruses, VOCs and odors. Unlike Ultra Violet lighting, Vetrospace’s technology is completely safe for humans and other materials. The light is non-ionizing and has been tested by the Radiation and Nuclear Safety Authority of Finland. (STUK)

At the beginning of March, M.D Leena Rahkonen asked staff at the maternity hospital about areas that are in need of The ability of blue light to destroy microbes is based on its ability to energize naturally light-sensitive compounds inside the micro-organism so that they start producing reactive oxygen radicals. Reactive oxygen species (ROS) are molecules containing very reactive oxygen, causing damage to the microbe and destroys it internally. 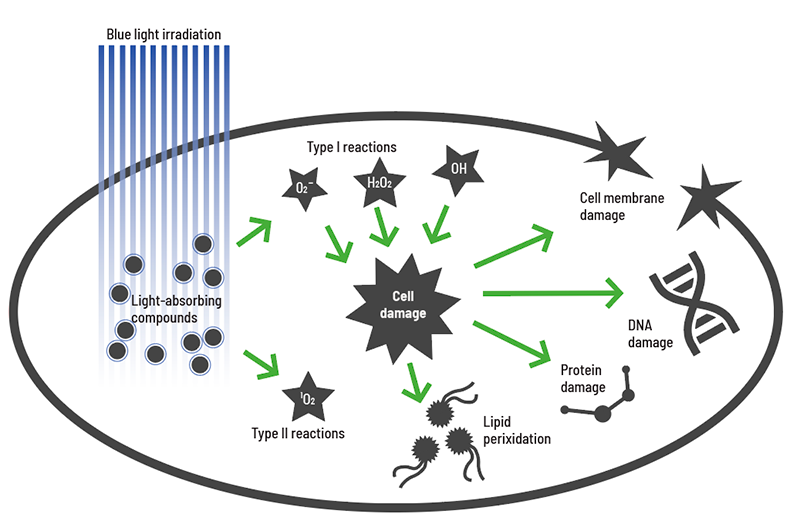 Research evidence shows that blue light is very effective even on microbes inside biofilm, unlike common biocides.

Photocatalytic reaction of the Catalytic coating

In spring 2019, laboratory tests were conducted at the FINAS accredited Metropolilab to determine the efficiency of our photon disinfection luminaires in the inactivation of Staphylococcus aureus (ATCC 6538) with the catalytic coating. The bacteria were plated on a regular melamine table top and irradiated at low intensity (blue light 0,7 mW/cm² and white light 500 lux). The results were confirmed by conducting three separate tests, with each test utilizing three parallel samples from each point of analysis. 6 hour irradiation resulted in reduction of up to > 99,9 % In our GROUPSPACE pods the blue light intensity is about 2,5mW/cm² ja white light intensity about 1200 lux.

The top 5 things to look for in a meeting pod

What is a pod and how you could benefit from one?